Looking for a menu like this one? Check out the Bellows Accordion Menu for WordPress

Out of the box, UberMenu puts no restrictions on submenu column widths (beyond that they can’t exceed the width of the submenu). If you don’t place any restrictions on these submenu columns, the columns are considered Natural Width. If we specify exactly how much of the row they should take up, they are Percentage Width.

Natural width columns are sized to the contents of the columns. Basically, the widest second or third level item in the column will determine the column width. So you could end up with something like this:

Notice that the first column is much larger than the others, due to the How I Met Your Mother item title.

In this case, note that the extra long title in the first column is forced to wrap, rather than expand the column, as all columns take up exactly 25% of the submenu width.

In order to use percentage columns, set your top level menu item to enable Full Width Submenus and set the Submenu Columns [Fullwidth] value to your desired number of columns (up to 7). 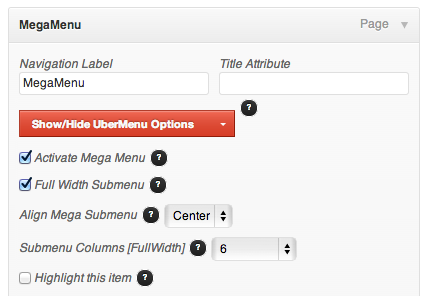 Percentage width columns are especially useful for submenus with multiple rows of columns, ensuring that columns from each row align properly